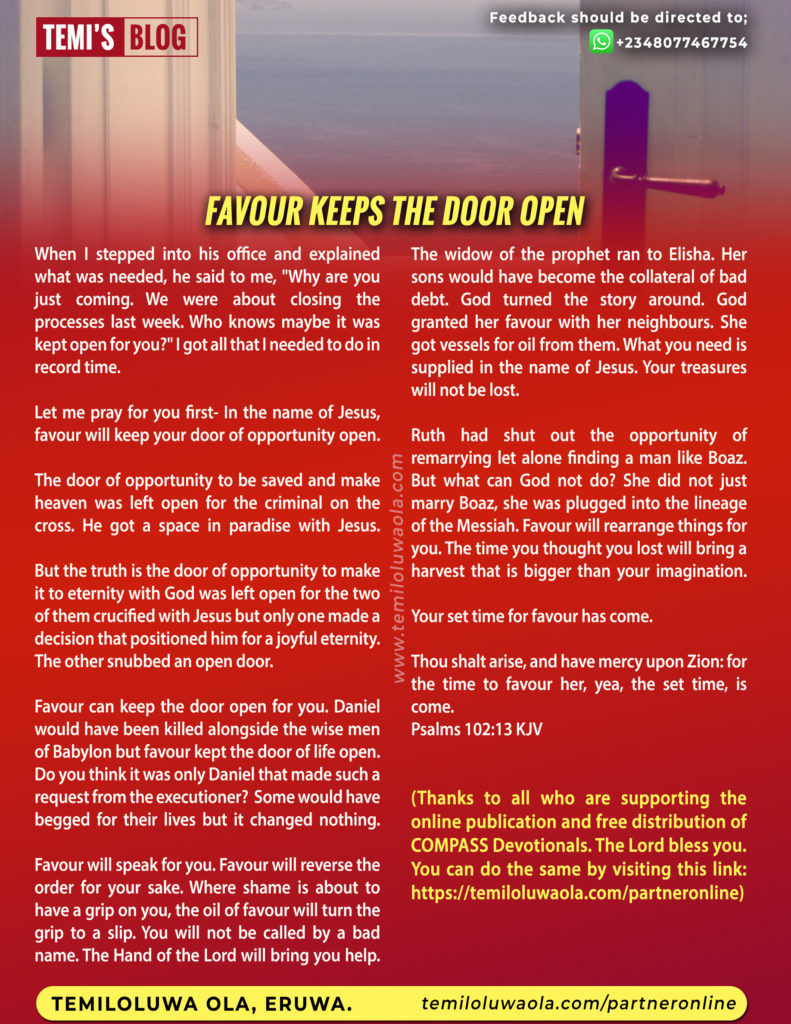 When I stepped into his office and explained what was needed, he said to me, “Why are you just coming. We were about closing the processes last week. Who knows maybe it was kept open for you?” I got all that I needed to do in record time.

Let me pray for you first- In the name of Jesus, favour will keep your door of opportunity open.

The door of opportunity to be saved and make heaven was left open for the criminal on the cross. He got a space in paradise with Jesus.

But the truth is the door of opportunity to make it to eternity with God was left open for the two of them crucified with Jesus but only one made a decision that positioned him for a joyful eternity. The other snubbed an open door.

Favour can keep the door open for you. Daniel would have been killed alongside the wise men of Babylon but favour kept the door of life open. Do you think it was only Daniel that made such a request from the executioner? Some would have begged for their lives but it changed nothing.

Favour will speak for you. Favour will reverse the order for your sake. Where shame is about to have a grip on you, the oil of favour will turn the grip to a slip. You will not be called by a bad name. The Hand of the Lord will bring you help.

The widow of the prophet ran to Elisha. Her sons would have become the collateral of bad debt. God turned the story around. God granted her favour with her neighbours. She got vessels for oil from them. What you need is supplied in the name of Jesus. Your treasures will not be lost.

Ruth had shut out the opportunity of remarrying let alone finding a man like Boaz. But what can God not do? She did not just marry Boaz, she was plugged into the lineage of the Messiah. Favour will rearrange things for you. The time you thought you lost will bring a harvest that is bigger than your imagination.

Your set time for favour has come.

Thou shalt arise, and have mercy upon Zion: for the time to favour her, yea, the set time, is come.
Psalms 102:13 KJV

(Thanks to all who are supporting the online publication and free distribution of COMPASS Devotionals. The Lord bless you. You can do the same by clicking this link: https://temiloluwaola.com/partneronline)

There is love in sharing
Tags :
doorfavourgrace