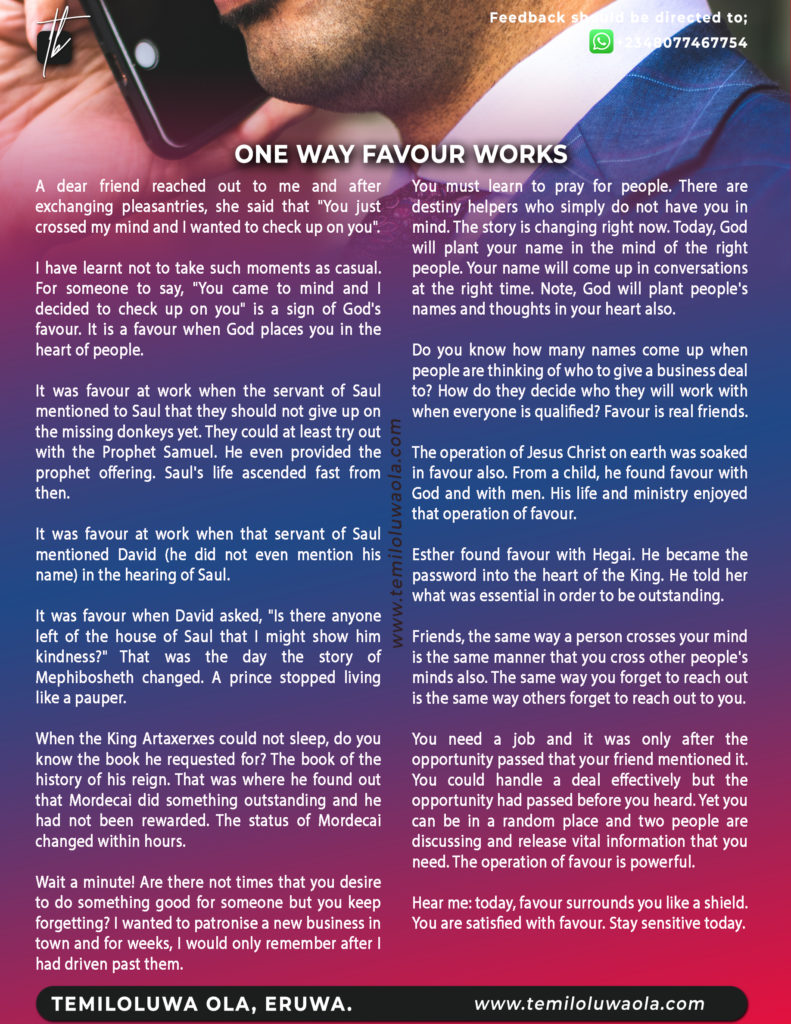 A dear friend reached out to me and after exchanging pleasantries, she said that “You just crossed my mind and I wanted to check up on you”.

I have learnt not to take such moments as casual. For someone to say, “You came to mind and I decided to check up on you” is a sign of God’s favour. It is a favour when God places you in the heart of people.

It was favour at work when the servant of Saul mentioned to Saul that they should not give up on the missing donkeys yet. They could at least try out with the Prophet Samuel. He even provided the prophet offering. Saul’s life ascended fast from then.

It was favour at work when that servant of Saul mentioned David (he did not even mention his name) in the hearing of Saul.

It was favour when David asked, “Is there anyone left of the house of Saul that I might show him kindness?” That was the day the story of Mephibosheth changed. A prince stopped living like a pauper.

When the King Artaxerxes could not sleep, do you know the book he requested for? The book of the history of his reign. That was where he found out that Mordecai did something outstanding and he had not been rewarded. The status of Mordecai changed within hours.

Wait a minute! Are there not times that you desire to do something good for someone but you keep forgetting? I wanted to patronise a new business in town and for weeks, I would only remember after I had driven past them.

You must learn to pray for people. There are destiny helpers who simply do not have you in mind. The story is changing right now. Today, God will plant your name in the mind of the right people. Your name will come up in conversations at the right time. Note, God will plant people’s names and thoughts in your heart also.

Do you know how many names come up when people are thinking of who to give a business deal to? How do they decide who they will work with when everyone is qualified? Favour is real friends.

The operation of Jesus Christ on earth was soaked in favour also. From a child, he found favour with God and with men. His life and ministry enjoyed that operation of favour.

Esther found favour with Hegai. He became the password into the heart of the King. He told her what was essential in order to be outstanding.

You need a job and it was only after the opportunity passed that your friend mentioned it. You could handle a deal effectively but the opportunity had passed before you heard. Yet you can be in a random place and two people are discussing and release vital information that you need. The operation of favour is powerful.

Hear me: today, favour surrounds you like a shield. You are satisfied with favour. Stay sensitive today.