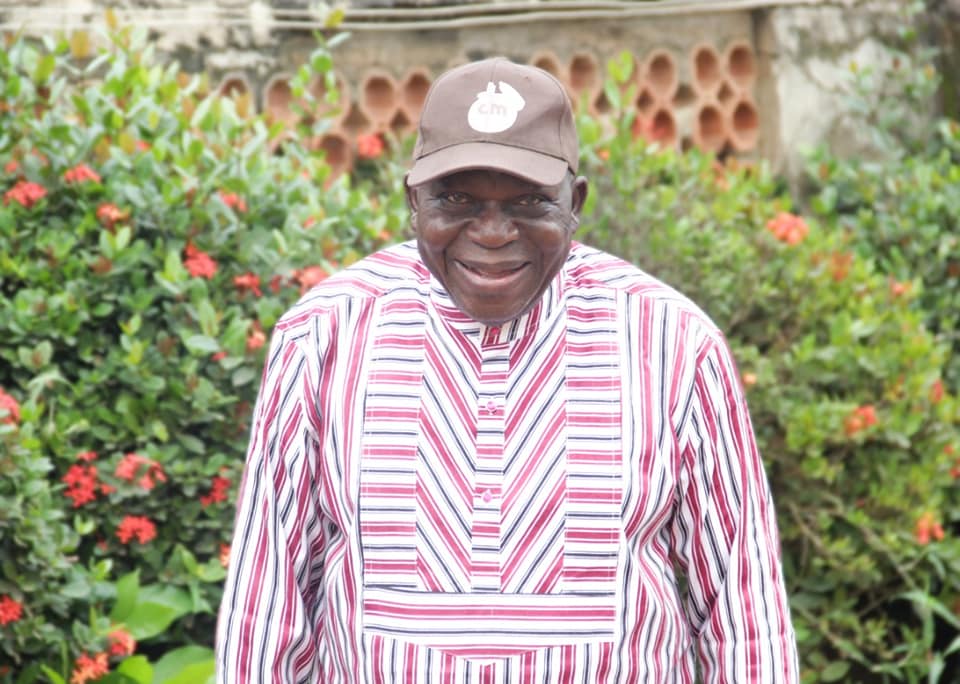 About a month ago, my heart kept going to Baba Mike Oye. I did not shove it aside. I went on YouTube and listened to one of the messages he preached. But I knew it was not enough.

I had not seen Baba in over 10 years. I sensed God wanted me to reach out. I called and backed it up with a text message. I told Baba that the little boy that used to carry his Bible and sit with him in the guest room admiring his fluorescent lamp was now a Pastor in full-time Ministry. His joy knew no bounds.

We then planned to meet up. The meeting happened on a Monday. Dad, Myself, and two others drove all the way to Osogbo to visit a veteran of the faith.

Baba had told me he would be out of Osogbo briefly for about two hours but we ended up waiting for about six hours. We were about exiting when we met Baba on the road. The first shock was that he drove himself. I was dazed (picture attached).

The second shock was that Baba had asked that they prepare a room for me. He expected that I was going to spend the night (That decision is still very painful right now. I was to return to see him in about 7 days but that ended up not happening because other events overtook it).

In the about an hour that we eventually had together, it was such an amazing moment of laughter, catching up on old fond memories of his frequent visits to Eruwa, prayers and blessings of a Father.

The third shock was when Baba asked for a lady that used to serve His meals when he visits Eruwa. He then said, “I still mention her to God in prayers often” (Ah! Service and Baba has not been in Eruwa in over 10 years at least) Trust me! Baba Mike Oye is an example of one who through faith and patience obtained the promise.

Baba lighted an entire generation. When Pastor Poju Oyemade honoured Baba in WAFBEC in 2017, I cried! I cried!!

My dad shared a story of a time when he (my dad) was on the sick bed. He was actually bed ridden for a while that year. Baba Mike Oye drove down from Port Novo through Eruwa to return home saying, “The Lord told me that my son needs me”. No phone calls. Just Spirit prompts. Ah! It touched a bone in me. Priceless Spiritual Heritage.

Papa Mike Oye once preached a three day meeting right after losing his son and didn’t mention to his host that he lost his son until the last day of the meeting. My God!

When he looked brilliant opportunities in the face and chose a life of missions, heaven must have nodded knowing that some of us were definitely going to come and get lighted by his obedience.

Baba, I saw all the awards on the wall of your home but they are nothing compared to the note you have written in our hearts permanently.

(I sure will send this message privately also but I love you Grandpa. I really do).

I know we will still see soon because I have questions to ask on behalf of my generation and those coming after us.

Happy 81st Birthday to a Silent General. Your son loves you.

These remaining years that we will spend together will be conscious years of telling you how special you are to us!

Happy Birthday to Scripture Union’s First Travelling Secretary. I could have thrown a salute but I would rather prostrate and say “Thank You Sir”.

(One day I will share the video of Baba’s blessings as he prayed over all of us. Weighty Words).

Post Script: Pastor Oluwashola Stephen Gbolahan, thank you for the sacrifice you are making on a generation’s behalf today as we honour Baba. You know why I am saying Thank You!